For those not into programming Ruby is a programming language. Ruby on Rails is a software library that extends Ruby and contributed hugely to its stellar adoption.

Many famous platforms are based on Ruby – Airbnb, Twitter, Basecamp, Kickstarter. Ruby programmers are probably the most tightly knit community of all programmers. But what is actually happening with Ruby.

There have been plenty discussions on the topic but they have intensified since 2015. If we discard the opinions of the hardcore proponents and opponents, it seems that there may be some sentiment in the direction, why would otherwise so many developers be asking this question.

Some arguments are based on counting the internet searches for each language, others on repository counters (repositories is where the programming code is kept), third on more or less established indexes.

Rankings
I actually looked at the popularity index TIOBE. Although it clearly shows that Ruby spiked in 2009, and then gradually faded away, it re-captured some positions in 2016. 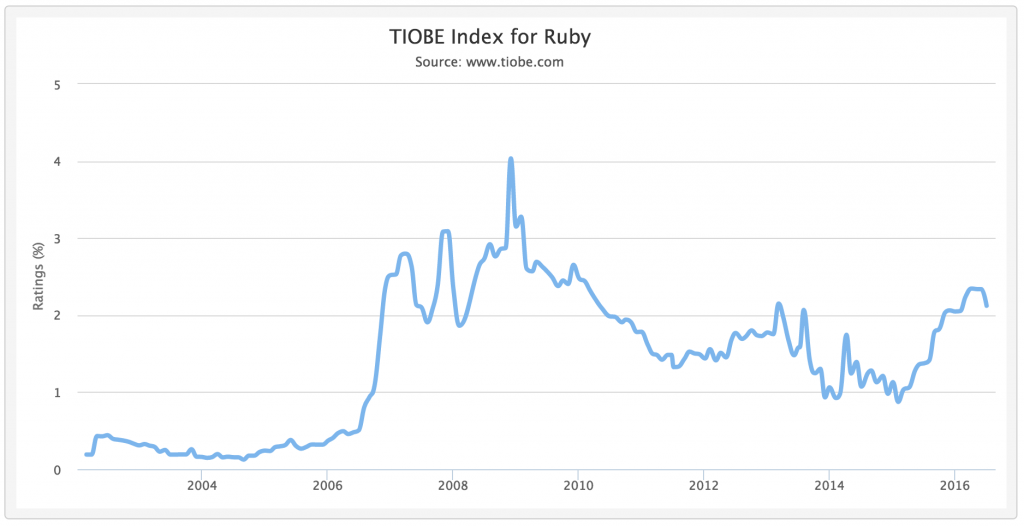 A striking fact though is the adoption of Ruby is way under Python, PHP and Javascript, and ranks just above Delphi/Objective Pascal. If you do not believe me, check the ranking. That was quite a surprise for me.

Availability
May be the worst part is that good Ruby developers are hard to find and when you find them they are already working on an exciting project.

High cost
When you snatch a top notch guy, it usually comes with high price tag. Although many new business consider RoR as their first option, the cost combined with lack of available developers, makes them consider other options soon after.

Bottom line
I do not want to sound like I agree with such a strong statement but I see indications pointing to a decline. In my humble opinion, this is mostly thanks to the maturity of PHP and Javascript that bring a horde of skilled developers plus fast and feature rich frameworks. Still, many languages and frameworks have managed to recover and build on their community and the Ruby one is probably the best of all. Also no language dies out suddenly, especially with such a substantial codebase and famous companies using it.

If you happen to be into programming, what do you think?