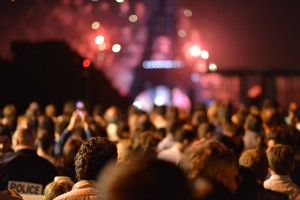 Yesterday, we talked quite long with a couple of friends about the terror attacks in Paris. Unexpected, shocking and probably not the last ones.

The events will certainly influence everyday life of the people of Paris. Unlike the previous attack, the rage was not against a satirical magazine publishing cartoons about Islam (among many others). This time the attack was against ordinary people – young, old, football fans, Parisians, tourists. It just emphasizes the nature of total terror – no logical pattern so nobody can feel safe.

The most discussed part was whether Germany will be next. If we look back, we had the Madrid train bombings (2004), London attacks (2005) and this year  Paris twice. It is scary to say but not so many big capitals missing from the list, with one notable exception.

There are many arguments whether we should be worried or not. Some say the German intelligence  is better prepared than the French one, others that Germany does not fight ISIS (as far as I know not true) so we should feel safe. The fact is there are many Germans fighting for ISIS – the press talks about hundreds if not thousands. So the risk of some coming back and moving the fight into Europe does not look so remote.

I cannot judge any of the positions but the fact is that terrorist attacks become everyday news and this is not the Europe I know from the past.

So the big question is: what comes next?

P.S. This post is rather atypical for me and has little to do with tech. But if you still insist on a tech connection watch the financial markets tomorrow. Markets response will definitely hit on the investment climate.